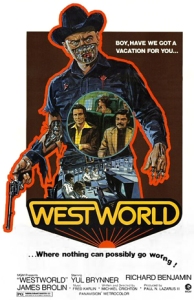 I will tell you that I loved this movie when I was a kid and I still think it’s pretty good and damn fun. However, if you think about it too intently you will find some things that just don’t add up. I’ll get to those in a moment.

Written and directed by Michael Crichton (yes, the Jurassic Park guy), it stars Richard Benjamin and James Brolin as friends who, at a thousand dollars a day, take a vacation at Delos, a highly technically advanced and historically authentic amusement park for adults.

The Worlds are populated with extremely sophisticated robots, the kind only possible in the movies and on TV. They are virtually impossible to differentiate from the guests at the park. And there is potential danger in many aspects of Delos, but the men (no women, for shame) who run the park have made it quite safe. Nothing can go wrong.

Well, not so fast there, Sparky. The robots become infected with some sort of virus and the park technicians lose control of the now marauding machines. Roman World becomes a bloodbath. Medieval World has a sword fight turn deadly.

In West World, a gunslinger robot, played brilliantly by Yul Brenner, has set its sights on our heroes and begins a relentless pursuit.

It’s very entertaining, but there are a few nits worth picking.

First, we are assured that the guns used in West World will not fire at any guests, because the guns are equipped with a heat sensing device which disables the weapon should it be aimed at a guest. Humans are warm, after all, but wouldn’t a robot generate heat as well? My laptop gets pretty damn warm. But, I’ll accept that contrivance.

However! What is the range of the heat sensor? Bullets (and there are real bullets in those guns) can travel quite far. What about stray bullets? Ricochets? At one point there was a bank robbery and shoot out taking place outside the brothel our heroes were visiting. Couldn’t a bullet come through a window or wall and hit an unsuspecting guest?

In Medieval World, what device keeps a sword from slicing or stabbing a guest? Sure, the robots could be designed to always miss, but suppose two guests get in a sword fight? What stops them from injuring or killing each other?

How good can a guest be at quick draw or sword fighting? Do you really think some everyday account would be able to do a joust, let alone ride a horse well enough to even try?

And there’s a bar fight in West World that plays as a great bit of fun, but how do the guests not get hurt? No broken fists or noses? They fall through railings, off balconies, and the crash land on tables. Bottles are busted over heads! Yet there are no concussions? No broken spines?

But, I have a bigger issue with the movie…

We are told this is the most realistic experience the guests can have of the Roman, Medieval, and Old West eras. There’s none of the creature comforts of modern times. Authenticity is the watch word of Delos. So, explain to me why it is that Benjamin and Brolin face off with Brenner THREE times.

In the first two gunfights, Benjamin “kills” the gunslinger and on the third meeting it’s Brolin who decides to take the honors. His timing was a bit off, because by that point the robots had gone rogue. Before Brolin meets his fate, the two vacationers even give a not-you-again groan when confronted by the gunslinger who won’t stay dead.

How realistic is it when you have to kill the same character three times in your week long stay? Was he triplets?

I would have had Brenner menacingly observing our heroes. I would have given some exposition that he’s the toughest, fastest, most-ornery yet scheming hombre west of the Mississippi. You know, build him up a little. Give him a rep. Make him a fearful, but enticing challenge. Then have him step up to take on our heroes as the robots have all gone rogue.

Again, despite these nit picks, I enjoy this movie very much.

I guess I should repeat to myself, “It’s just a show, I should really just relax.”